Located on the Cap Saint-Pierre peninsula of Saint Tropez, just above the shimmering waters of Canoubiers Bay, is the majestic and internationally acclaimed domain, Les Parcs de Saint Tropez.

The authentic opulence and tranquility of this special gated community can be felt from the moment one passes onto its lush land. With an impressive 110 hectares of land and an estimated 160 luxury properties in the estate, Les Parcs de Saint Tropez attracts the wealthiest and most exclusive individuals to its gates.

As one of the most well-known luxury residential complexes in the world, Les Parcs has an esteemed reputation for being not only the safest (due to its 24h security and guarded gates) domain in Saint Tropez, but also the most opulent. Residents of this domain enjoy access to a pristine private beach, professional tennis courts and unparalleled upkeep of common grounds such as manicured gardens and flawless roads. Becoming part of this community is something which is highly sought after by the world’s elite.

Saint Tropez House has experience working in this prestigious domain for the past 20 years and has a selection of stunning villas for rent and sale in Les Parcs de Saint Tropez. We have decided to take a closer look at this famed residence to better understand its origins and what makes it the most exceptional residence in Saint Tropez!

This residential titan of luxury living was not always what it is now. This prestigious plot of land overlooking Canoubiers Bay first caught the attention of wealthy Marsellais nobleman Octave Borelli. In 1895, this adventurer and Egyptian enthusiast bought the land currently known as Les Parcs and commissioned the construction of an impressive château. After 5 labor-intensive years, this Moorish masterpiece was ready to be used by Mr Borelli as a private residence until his death in 1911. This stunning piece of architecture is Château Borelli.

This awe-inspiring building features two majestic towers and a large central section, all covered in extravagantly ornate detail. Today it is home to 6 ultra-luxurious private apartments. A 150m2 apartment in this historical gem would cost no less than 10.5M EUR.
Château Borelli is also a historical gem in Saint Tropez and holds within its walls much fascinating history. The château unfortunately did not escape the clutches of war and was taken by the Germans in 1944. Both the roof and library were significantly damaged during this grueling period. The property was totally abandoned after the war until it was eventually purchased in 1988 and meticulously restored to its current glory.

Today this magnificent château stands as a historical beacon in the heart of Les Parcs, reminding all of glorious and tumultuous days past.

St Tropez House is proud to have the picturesque Villa Hacienda in its collection of villas for rent in Les Parcs. This villa overlooks the iconic château and sits on an impressive plot of manicured land.

A Man of Vision: Robert Geffroy

In the 1950’s the domain that we know today slowly began to take shape thanks to one man. It was during this period that the vast plot of land was divided into lots and transformed from a savage Mediterranean landscape to a residential Garden of Eden.
After arriving on this land in 1951, due to the engine failure of his yacht, a wealthy visionary named Robert Geffroy saw the potential of what would soon become his ambitious vision. In 1952, after suffering through much legal and financial turmoil, Robert began by converting 16 hectares of land into a residential complex called Park Pointe Ay. The following year the first sale on this land allowed Robert to see the real potential of this area and begin his building project. During this time Robert began working with an entrepreneurial and local woman by the name of Maria Leone, who would work with him in Les Parcs for the next 36 years. In the years to come they would slowly begin to encompass neighboring domains to create the massive 110 hectare land that Les Parcs has become today. Experts were brought in from all over the world for this building project, something which the charming village of Saint Tropez had never seen before. From Swiss sophistication to German precision, Les Parcs saw the merging of international expertise.
The sheer serenity, security and privacy that one feels when entering Les Parcs is no coincidence. Many years of expert planning, building and organization made this one of a kind domain a huge success, attracting the attention of UHNWI all over the world.

Today Les Parcs de Saint Tropez has become somewhat of a landmark for the elite of the world who wish to establish their wealth and status in Saint Tropez. Becoming a part of this extremely exclusive community is something which has, and continues to be, highly-sought after. From fashion icons to industry tycoons and CEO’s, only those who have amassed or inherited substantial wealth can afford to purchase property in Les Parcs. St Tropez House recently launched a Sales Report which provides an inside look at the property prices in 7 of the most notable districts of Saint Tropez. This exceptional report sheds light on property prices in Les Parcs by revealing the average sales price in 2018-2019 sitting at 13,000,000 EUR. When compared to other areas such as the centre of Saint Tropez (which had an average sales price of 4,200,000 EUR), one can see the vast price difference of Les Parcs with other areas of Saint Tropez.

Properties in Les Parcs are very luxurious and are expected to live up to their large price tags. It is commonplace for new owners to either tear down or significantly renovate their new property to make it as modern and amenity-filled as possible. Some owners who invest in these extravagant properties are interested in receiving a return on their investment and wish to buy to let, while others prefer to use them as private residences to enjoy with their family and friends. Several properties in Les Parcs are used as second-homes residences.

The tendency of leaving the original Provençal charm of properties while modernising the interiors in Les Parcs is perfectly demonstrated in Villa Malko. This newly renovated villa in Les Parcs provides a stark contrast of Provençal exterior with sleek, cutting edge interior design. Seafront villa in Les Parcs Villa Thalassa is another example of a modernised Provençal property. Villa Agape on the other hand has renovated the interior in such a way that it is fresh and beautiful but retains the original Provençal design elements.

The fascinating history of Les Parcs, from its majestic château to the inspired vision of one man, is something which has made it the luxurious and highly sought after residential community that it is today.

Get an inside look behind the gates of this prestigious gated community!

Watch Emilia Jedamska, CEO of St Tropez House, give a guided tour on Channel 5 series Playgrounds of the Rich and Famous of two of the most prestigious villas in the collection, villas Virasana and Asana. (tours begin at 4.30 minutes in the video) 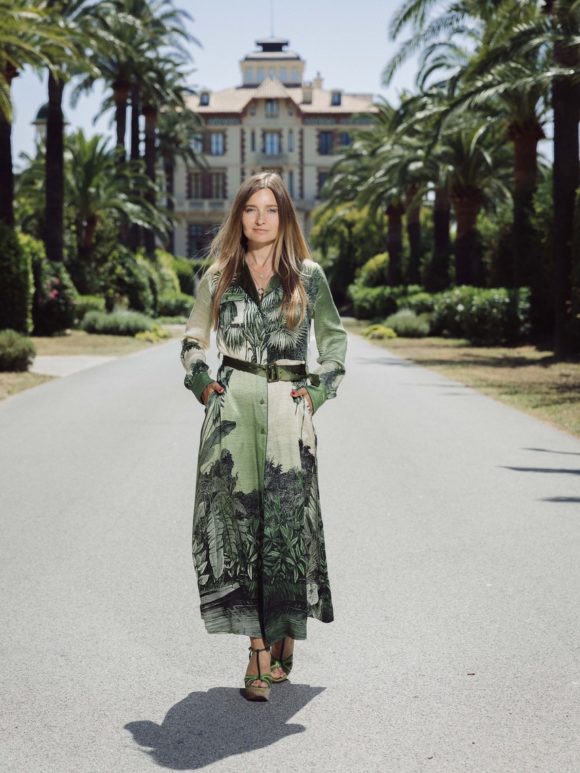 Next post110 Hectares Of Gated Luxury: Why Rent Or Buy A Villa In Les Parcs De St Tropez?